skip to main | skip to sidebar


During his short time as an ambulance driver he was in Piave at the front. He was five days into handing out cigerettes, chocolates and coffee to the Italian soldiers in the trenches when one evening a trench morter shell killed the Italian private in front of him wounding him and wounding another soldier. Hemingway carried the other soldier to the first aid station in the process sustaining machine gun wounds to his right knee and foot.

This biography is written by Henry Serrano Villard an American Red Cross Ambulance driver and friend of Hemingways and also James Nagel a Hemingway Historian.

The main contents of the book are the letters that Agnes Von Kurowsky wrote to Ernest Hemingway when she was going from hospital to hospital in Italy to Hemingway whom was in the American Red Cross Hospital in Milan. Then the letters from Hemingway home to his parents.

I read this book in conjunction with "A Farewell to Arms". Which was a great way to read both books. As the love affair between Agnes and Ernie is the basis for the love in "A Farewll to Arms".

First, I have to start with how romantic the Italian countryside sounds. Even in the mist of war, I want to visit. Both Agnes, Ernie and Henry present a beautiful description of Italy. Most especially in Milan.

Secondly, this is a wonderful book to get historical facts about Italy and World War I. Very descriptive about the retreat from the Austrians. The relief when the American troops arrived and help the Italians win the war and gain back their country.

Agnes' letters toward the end of the war show how scary it was for the civilians. Many children and women where near several bombs that had not gone off and were innocent victims of curiousity. Agnes describes the wounds suffered by the civilians, and soldiers. Many whom suffered from jundice and maleria.

Hemingway's letters are descriptive about the front and his wounds he suffered. He also describes his wounds he received. Enough that as a Mum myself I would have wanted to go to Italy to be by my son's sides.

Most importantly, the romance between Agnes and Ernie. The Romance that later became "A Farewell to Arms", Hemingway's greatest Novel. The novel that would be banned in Italy because it accurately described the Italian retreat from Austrian soldiers. More importantly, the love that blossomed in a hospital in Milan. In the romantic countryside of Italy between a nurse and a patient.

Villard, whom kept in touch with Agnes and talked to her before her death, said that Agnes denied that Ernie and her were in love. However, Hemingway's letters home and Agnes' letters to Hemingway, and Henry's memory of watching the love begin to grow show us the truth.

Finally, the heartbreaking dear john letter, that broke Ernie's heart. The letter that forever stayed with Ernie and shaped his future love life. It is clear that Agnes and Ernie were in love. Was it the romantic Italian countryside? Was it two scared and lonely American's in Italy far from home, seeking comfort in another? Was it true love that was split apart by war?

It is clear the Ernie was deeply in love with Agnes. The love and the heartbreak brought both joy and pain to Ernie. It gave us "A Farewell to Arms". A must read as there is so much more to Ernie Hemingway and after reading this book I felt I understood more the pain of Ernie's heartbreak and his need to share his love and pain in Farewell. Beautiful biography on the great American Writer. 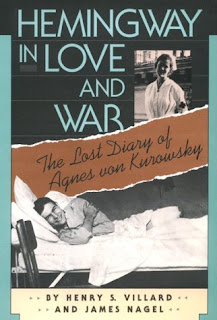 
The Vine is a group of friends from all over the world who met online and decided to form a book group with a difference. Each of us selected a book we loved or just wanted to share, and sent it forwards so each month everyone read a different book. It has brought us closer together through friendship formed from the love of books.